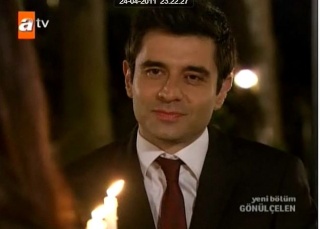 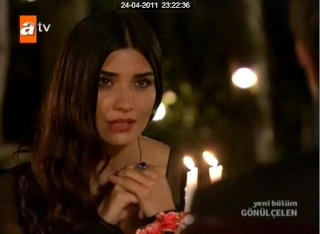 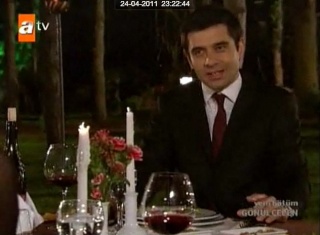 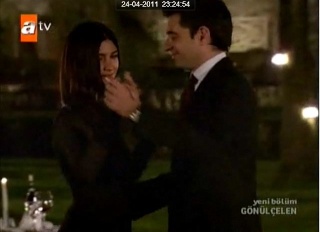 hasret says she has a surprise for Murat and they should dress up tonight.
**
gülnaz and kadriye want to go to cobra's place.. they see cobra showing buse how to dance and be coy on stage.
**
Kadriye says they will have revenge.. but they have to be calm.
**
nakish could not make it. she was very excited and scared so she could not meet the man.
**
hasret and murat are having dinner outside hasret says we were her last year the same day.. It has been one year.
they have a toast.
**
ceren and levent have invited ethem over. for dinner
******************

Ethem brings Raki.
**
Hasret says the surprise is not over and she opens the gramophone.
she goes over and takes his hand.
**
they dance to the music. they are as happy as kids.
hasret laughs..throwing her head back.
****************** 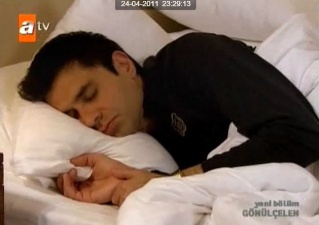 Nesrin is eating alone and now she invites nakiye for dinner. and nakiye says she has eaten she is full.
**
nakiye says she will never be able to meet her admirer.
**
gülnaz and kadriye are waiting backstage.. for Buse..
they catch her as soon as she comes in.
**
hasret again knocks on murat's door. and this time he is sleeping.
but his light is on..
**

the restaurant is full. cobra comes down.. and sees gülnaz sitting. gülnaz says I will watch sude's first song and then go.. cobra pretends sude got sick so BUSE will sing instead.

Hasret has the hotel people call murat.. he wakes up.. they open his door.
she says she is worried and he says I think I have a cold.
**
(she made him walk out barefoot )
she says you are staying in bed.
he says are you going to look after me?
she says I won't if you do not want me to.
**
cobra says the people inside will beat him. buse has to go on stage.
**
cobra now has to find someone new.
**
kadriye tells buse about the foods she likes..
**
hasret gives soup to Murat. and he says he can drink it himself. she says that soup is going to be finished..
**
he chokes on the soup
she says don't try to trick me. that soup will have to be finished. she then gives him water.

**
nakiye tells ceren she was excited she could not go to the meeting..
**
ethem and levent are drinking and they are about to get drunk. ceren tells nesrin ethem is at levent's house.
ethem tells levent he was opposed to hasret at first too but he now likes her.
**
nakiye is broody and nesrin gets cross with her.
**
murat coughs in his sleep. hasret is in his room waiting on him.
**
saime tells balçiçek.. she should not just sit and be upset. if cafer loves her he should have been ok with her job. balçiçek says you are right.
she goes to find gülnaz and cobra.
**
murat has fever.
she says we need to go to a doctor.
murat says just stay with me all I have is a fever.
I will be fine.
hasret calls her mom.. and gets a recipe. goes down to the kitchen to make it.
**
balçiçek comes at the last moment and saves the day for cobra.
**
Hasret the recipe to Murat. he says I worried you and you must be tired because of me. she says just drink it up..