Let's cut him off. 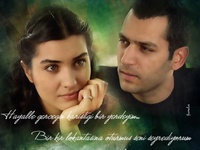 "Iss Pyar Ko Kya Naam Doon on Star Plus is a show which not only had a colossal opening but it has slowly and steadily climbed up the TRP charts. With an intense tagline "Nafrat Paas Aane Na De, Mohabbat Door Jane Na De," the Arnav and Khushi love story has become a force to reckon with.

On completing 100 episodes, Rangmunch. TV was fortunate to bring to you then, the messages of the entire cast and crew, including the two Producers of the showRajesh Chaddha (Panglosean Entertainment Pvt. Ltd) and Nissar Parvez (4Lions Films) who told us about how the story was born.

oday when the show has completed a double century, we are glad to bring to you Gul Khan, the Producer of 4Lions films who not only talks about her experience with the show so far, but also gives an insight on her interpretation of the various characters on the show.

So over to Gul Khan, the brain behind this beautiful saga, who etched Arnav and Khushi's character and created magic on the small screen.

Gul: We wanted to make a story about a man, his love and his sister,and how his love also becomes the other woman in his sisters life. Not many people know when the show was first conceived, the show was narrated to thechannel as "Didi ki Saut". But we decided it scrap it since it was too regressive. The working title of the show was "Vaidehi" before this tale found its hit name that rings romantic bells in every heart today. Later we decided on "Iss Pyar ko kya Naam Doon" before the show was to go on air.

Arnav and Anjali: The Thesis and Anti-Thesis of one another

Gul: If you actually look at the story, though both Arnav and Anjali have a very similar past, and you on the face of it feel Arnav has taken things badly, it is actually Anjali who is more damaged while Arnav has taken a more practical route. At all times he is the one who is holding her. You will observe Anjali is paranoid, obsessive, see's bad signs and superstitions, clings to her brother and husband all the time. She has taken whatever has happened badly hence turning Arnav totally protective towards her. She is complexed about her foot, her husbands love for her and things going wrong all the time. It would take only one button to push her off the cliff. So imagine how hard things are going to be for her when she learns the truth about her husband she loves more than her life.

Gul: The story demanded Arnav to be dark unlike most of the leads in various love stories. If you see in Iss Pyar Ko Kya Naam Doon, Khushi Kumari Gupta and Arnav Singh Raizada are complete opposite to each other in every respect. While Arnav believes in live-in relationships, she believes in the institution of marriage. Arnav does not believe in love where as Khushi lives for love. Their differences go to the extent that Khushi loves Jalebis while Arnav is diabetic. They are just poles apart. If you ask me, I feel a love story becomes more interesting when the guy is brooding and the girl who is all bubbly eventually breaks that mould. I have seen people comparing Arnav with Maan, but if you ask me one shouldnt do that because Maan was a tough character where as Arnav is a dark one. The only person he cares about is his Sister Anjali and can do anything for her which is something that we have all witnessed now.

Gul: When you share a connection with a person, you cannot run away from the fact no matter how hard you try. Both Arnav and Khushi are irresistibly attracted to each other and yet are dangerous for each other as well.

Gul: Anjali is physically handicapped and feels inadequate because of her disability to walk normally. Shyam is that one person who when in the Raizada house, showers her
with love, protects her and gives her undivided attention. Arnav always wanted someone like that for his sister. To add on to this, Anjali also is head over heals in love with Shyam. To have a person like Shyam who has no issues with being a Ghar Jamai , loves his sister to bits and also takes her tantrums is something that fits Arnav's requirement perfectly to the T.

According to me the character of Shyam is very real because people like him do exist in the real world. There are men like him in every day life who even after being married, have a roving eye. Also surprisingly they don't find anything wrong in what they do and more than often get away with it as well. As they say looks are always deceptive.

Gul: Arnav is a very hard hearted person and khushi just presses the wrong button all the time. He does not like dancing, he does not like people shouting at him, he does not like being adviced and Khushi does all of that. She irks him completely. But inspite of all the irritable qualities Khushi has, Arnav still gets drawn to her which gives way to his emotional turmoil. Even when he losses control for a spilt second in the "jadoo hai nasha hai" sequence, the very next moment he blasts her, not because she is at fault but because of his own weakness he has for her. He hurts her more as he is unable to comprehend how and why Khushi affects him so much.

Gul: We always visualised the Arnav-Khushiromance in larger than life style and hence worked towards portraying it that way. The passion, the angst, the music all put together is what makes it look somewhat like Geet, so comparisons are bound to happen. We also feel that setting up characters like Shyam andAnjali was very important and crucial. The strong unspoken bond between Arnav and Khushi wouldn't have worked, had these characters not been established strongly. Setting up the characters is a very important aspect of any show. Arnav who does not believe in love, sees Khushi in different light and eventually comes to love her, is all a part of the set up. However, currently he doubts khushi and in the bargain punishes her as well as himself by behaving in a ruthless manner, is once again for his sister Anjali. Had his relation with Anjali not been established, these scenes would be very frivolous.

Thank you All for the Team Work

Gul: (laughing loud) I keep thinking. The entire bunch of IPKKND has worked tremendously for the show.Ved Raj who is writing the story is brilliant. Gautam Hegde who does the screenplay is so funny and Hitesh Kewaliya who writes the dialogue is even funnier. He was the one who brought about the "Hello Hi Bye Bye,"which has become the signature dialogue of Manorama Mami. There is Megha who is the Creative Director, "woh bechaari soti nahi hai, bas kaam hi karti rehti hai." Lalit Mohan and Arshad Khanwho handle sequences fantastically. Raju Singh's melodies always takes the love story to a different genre. We have a good editor who does amazing cuts. The entire team is what IPKKND is all about.

Today Rangmunch team is back with a huge CONGRATULATIONS note to the entireIPKKND Team for hitting the benchmark of 200 episodes. We hope the show continues to rock the TRP charts and win many more hearts in the days to come.

(As told to Niharika Vidya Sagar and Swati Ghosh)

-Lui Arnav ii pasa doar de sora lui.."The only person he cares about is his Sister Anjali and can do anything for her which is something that we have all witnessed now."

-Iar faptul ca a spus " but if you ask me one shouldnt do that because Maan was a tough character where as Arnav is a dark one. " cred ca spune totul...

-Lui Arnav ii pasa doar de sora lui.."The only person he cares about is his Sister Anjali and can do anything for her which is something that we have all witnessed now."

-Iar faptul ca a spus " but if you ask me one shouldnt do that because Maan was a tough character where as Arnav is a dark one. " cred ca spune totul...