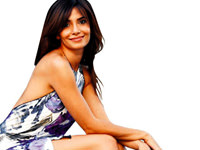 
I: what kind of series is mukemmel cift, is it sit-com?
S: its not exactly sit-com. it has very strong dramatic plot and also funny situation is very intense. its mostly like friends, sex&the city. its enjoyable and different work. similar series didnt done in turkey. its format is from argentina and its watched alot in most countries like italy and greece. its also done in arab countries. scenerio is adapted to our culture, like the other countries done. our director is jale atabey özbek.
I:what is your role in the series?
S:I'm acting the newscaster.my husband and I are very popular in the country, our picturs are in all magazine covers, we are the most enviable couple. we are very successfull and apparently we have a good marriage. our news format is specific to our own, we ere saing darling to each other while we announcing the news severely.
I: is your husband in the series(tardu) actually a gay in the series?
S: he isnt a gay, theres a surprise in the series.
I: isnt he kiss a boy in the first episode, its written in the magazines?
S: as I said, its surprizing series, especially in the first episode there are many surprises.I cant say anything now but I'll say dont miss the first episode. but yes, everyone will talk about this series. there are something that attract public attention. and lastly I'll say tardu will act two differnt people.
I: how this series shown in arab countries, is the a gay people there?
S: in arab countris, the gay role that tardu acted is acted by a girl as a fat girl.
I: i guess its a brave series for our countries?
S: its not hard-line like argentina, but in ourcontries its a brave series. it will be discussed, theres media criticism and hypocrisy in relations.
I: would you act lesbian role, if its offered you?
S: for me, I should belive the character in the scenario. its important if I could simulate the composition or not. so its a specific question, but I could talk through cenerio. I had acted prostitute in theatre. roles don show our preference.
I: do you have a limit?
S: its important for me what, who, how shoots and how its shown. I'll act lesbian but who shoots, how its shooted and whats the scenerio, these are important questions. I'll ask the same questions when I act the farmers daughter. I ask the qustions when I sove the characters, who is she, where did she come from, whats her psychological state? our work is the art of asking questions. in my private life I also ask questions. I should believe something.
I: then will it said to be that you decide logical, not emotional?
S: I'm a very emotional one. maybe these are shields. I'm workind with a good manager, I consult my family,and I'm asking alot of questions.
I: would you kiss a girl, if its need in the scenerio?
S: of course I will. for example fatih akin done this in yasamin kiyisinda. nurgül yeþilçay kissed a woman and it didnt startle me. it was within a matter of life, I didnt feel that kissing.
I: I hear you are very careful when selecing the projects. whats the reason that you acceptance this project?
S: I accepted it diffucultly, my manager gaye sokmen is very effective because I couldt decide and accept the tv projects.
I: is gumus affected that you are making decisions difficultly?
S: maybe. theres great expecrations now, not only in turkey but also from world and this will scared me. i refused the roles that are similar to gumus.
I: your familiarity with the cemara began in gumus as a theatre graduates actor, and this series did you the queen of the middle east and the balkans. are you lucky?
S: if I say I'm very lucky, I'll be doing an injustice to all the past efforts. I graduated from a school of a very good teachers, I'm the daughter of a family that supports me, I'm working with an agent that gives rigt decisions. I take my job seriously and like it. and also yes I'm very lucky.
I:what would you say about the difference between theatre, cinema and tv series as yo did both of them?
S:the job is acting, so there isnt any differnce but there are some technical differences. in theathe, you face with people, not cameras. you are there in theatre, there isnt montage or dubbing. cinema is the art of the century. television is the place to ahead, recognition more, and gain experience.
I: after gumus, you have storm in middle east and the balkans, is this storm stopped?
S: it didnt stop as we do do many interview and work. now there are many new series that liked in middle east, but because gumus is the first, it became stable. I went to bulgaria last mounth and participate to tv programs last.
I: what did you do there, is there new projects?
S: I shot commercials, I went to presentations, I participated in festivals, I acted in tv series as a guest stars. there are many cinema film offers, but we are meticulous because of the great expectations.
I: how are the arabs in terms of attention?
S: they are very hot. for example, for my bithhday they send gifts to my agent from all around the world.
I: I think the males are more remote, is anyone kissed you?
S: interest of men is also very high, I dond rememember if anyone kissed but they take lots of photographs.
I: women?
S: they do everything(loughing).
******************